The Happiest Place on Earth... Not So Much


Cancer doesn't discriminate.  It doesn't care who you are, how much money you have, whether you have kids, a spouse, parents.  It doesn't care if you're a good person and it certainly doesn't care where you are when it decides to drop in and stay for a while.  Which, if you're home with family or friends or even alone, is probably a good thing. Where else would you be as you deal with surgeries, treatment, drugs, emotions, healing?

However, what about the beginning of this mess? Where were you? I've heard different women talk about getting the call that in a split second altered their lives.  Some were at work. Some were lucky enough to be home.  One woman was driving across a bridge.  More power to her for continuing across. 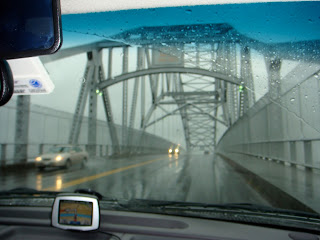 I was in a car that fateful day. My husband was driving and my then three year old was in his car seat behind me.  It was raining. Actually, it was pouring, coming down in such torrential sheets we could barely see.  As I listened on the phone, I wasn't surprised to hear the words. On some level I knew they were coming.  It was just hard to hear them over the pounding rain and the voice in my head repeating, "Say benign, say benign." When the doctor didn't, I handed the phone to my husband without saying a word and I cried.  I cried the whole way home.  I couldn't stop. Even when my little boy, who had never seen his mommy cry before, kept asking why Mommy was sad.
Now, here's where it gets funny.  My family and I were headed to Disney World the next morning for a trip planned months before. Talk about timing.  What goes through your head when you're told you have cancer?  What's the first thing you want to do? Who do you call? What appointments do you make?  Which commitments do you cancel? How do you process this heartbreaking news?
I know what I wanted to do.  I wanted to curl up on the bed and pretend I didn't hear those words. Pretend they didn't just change my life.  How could so few words, "It's a small cancer," change so much?
Thankfully, my husband took charge when I couldn't and started to make phone calls and ask questions.  Our instincts told us to act fast.
Get an MRI!   Find a breast surgeon!   Get it out!
We had to learn cancer doesn't work that way.  It's a process and nothing would change that over the next week.  Doctors said to go on vacation and try to enjoy ourselves.  The cancer would be there when we got back.  Well, they didn't say that part, but I'm pretty sure that's what they meant.
Then we were there, in Disney World.  I somehow finished packing and got two small boys on the plane without falling apart. Because that's what a mother does.  She carries on.  I spent the next seven days sharing one room and every waking moment with my family.  I never had private time to feel sorry for myself or question if I'd get to see my boys grow up. So, I had those thoughts in public, while roaming the Magic Kingdom, taking the boys swimming, riding the monorail, cueing up for Dumbo one more time.  These thoughts took over as I watched all the other families have the time of their lives.  I wondered if they had had such news.  Was I the only one that was sad here? It's cruel, I know, but a part of me hoped not.
Carrying that burden in such a joyful place was almost as hard as hearing the news.  I tried to live in the moment and enjoy the kids' excitement.  I really did, but every happy thought, every smiling face was followed by a million "What if's?" and "What's next?" 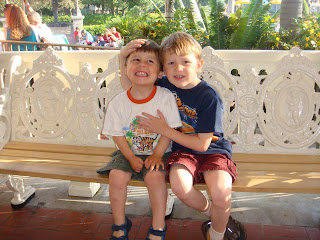 We finally went home, two happy boys, two emotionally drained parents and began the business of fighting this thing, because even though I had been in the happiest place on earth, cancer didn't care.  It was still along for the ride.
Where were you when you first heard the news?  How did you deal?
Posted by Stacey at 10:22 PM