When Breast Cancer and Motherhood Collide

I've been a bad mommy, a mean, inconsiderate mommy.  It's true.  I've spent the last 18 months fixated on myself while completely ignoring my children.  At times I'd be in the same room with them, and have no idea what they were doing or talking about.  I was too absorbed in my own cancer life and what's more, I wanted to be...There I said it.  It's not that I liked thinking about cancer 24/7, but I needed too.  There was just so much to take in.  All. The. Time.

Making meals for the boys, getting them to school, bathing them, was all difficult enough.  Play with them?  How could I sit on the floor and play games with thoughts of reconstruction, oncologist visits, and my CA 27, 29 number swirling through my head?  Cancer's daily life was so consuming there wasn't any way I could take part in fun or even conjure up the patience needed for something as simple as arts and crafts. Sticky kid fingers and one clogged adult brain do not mesh.

Things collided early one autumn morning as I was waking my youngest for preschool.  I noticed he had something stuck in his hair or so I thought. On closer inspection, I miserably determined it was a tick, and not a tiny tick, a plump one, a fat, happy one that had obviously been there a while making himself right at home and it was not stuck in his hair at all, but embedded in the sweet skin of my four-year's head.  Yuck.

Crap.  What to do?  What to do?  Pulling it out myself was out of the question.  I can endure many things, but this was beyond my mothering capabilities.  This wasn't some old splinter that needed pulling out.  What if I tried with my trusty tweezers and it still stuck?  What if I hurt my boy? How long would all this take?  There were many ways this could play out, none appealing.  What if I couldn't get my son off to school on time or worse, what if the answer was to miss it entirely to fit in a doctor visit?  As skived out as I was about a tick burrowing it's hungry head into my son's head, I wasn't ready to have it mess up my day. This was truly a dilemma.

I was tempted to send him off to school and have it become someone else's problem.  Nice mom thing to do, right?  There was a nurse on staff, after all.  Shouldn't her responsibilities include helping out a mother too preoccupied with her own stuff to get a fat tick off her son's head?  I had a lot on my mind.  I needed the kids out of the house as soon as possible in order to get down to my sulking.  This tiny tick was a huge problem for me.

The morning proceeded as if nothing was wrong, but guilt was weighing heavily on my shoulders.  Cancer and guilt...Not a good day.

I was beginning to accept I couldn't let the tick live on, but I was pissed, so pissed that this little bug invaded my life, interrupted my wallowing.  I wanted to just be left alone and this minuscule, bloodsucking creature was preventing that.  It was forcing me to put cancer on the back burner and get back into motherhood.  I didn't want to go. 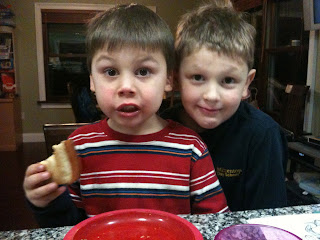 I realized then I was at a crossroad.  It wasn't about the bug.  It was about doing right by my children.  I couldn't go on this way. Pretending to be a good mother, seemingly making all the right moves, caring and invested in their lives, but really it was a sham, a house of cards waiting to fall.  I needed to own up, stop faking and stop short changing these little guys. They deserved better.  A full time mother, present in their world, not someone vaguely watching from the sideline, but someone ready to play the game. Cancer wasn't a free ride away from motherhood, at least not for me any longer.

The tick woke me up.  I started to see the truly important things I was missing, the things I was messing up.  It was later that very day, I began searching out other women with breast cancer.  Having others to talk to helped free up the brain space required to let my kids back in along with my job as their mother. Turns out, there's room for all.

By the way, I did make the nurse at school remove the tick, but she used my own tweezers, so I did help after all.

Did you reach a point when your ways of dealing with cancer had to change? What helped?
Posted by Stacey at 10:38 PM