When Comfort gets Lost

Tonight, my son lost his Snowy.  What's a Snowy?   A small stuffed polar bear my brother-in-law gave him when he was about a year old, but it's really so much more.  In the nearly 3.5 half years since, there's rarely been a moment, excluding school, that my son didn't have Snowy by his side.
Snowy is the best possible friend.  He goes everywhere with us and demands nothing.  He's been on every vacation, every long car ride, every doctor visit.  He's been packed in suitcases, duffel bags, and backpacks.  He's been thrown in the air and dragged on the ground.  His once shiny, black eyes are dull and scratched.  He will never again be bright white and the once furry nose is now threadbare from thousands of nose rubs, but none of that matters.  Snowy provides unrequited companionship, comfort and a deep sense of security.
In the early years, Harrison would suck on Snowy's fuzzy snout as he fell asleep, but as he got older that lessened and we noticed he would reach for Snowy and rub his cute, black nose whenever he was upset or angry. It seemed to calm him.  By being there, Snowy soothed away his stresses and made his world right all over again. 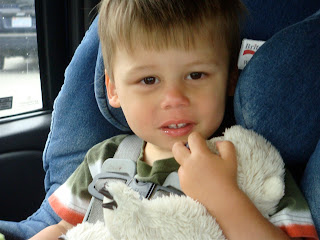 To our dismay, at bedtime tonight, no one could find Snowy.  He wasn't anywhere.  We checked all the usual places:  Harrison's kitchen chair, family room couch, pantry, car....No, no, no, no.  Bathroom?  Thankfully, no.  Where was Snowy?  All this searching began to drag on and it was getting late.  I don't know if it was fatigue or a hint of newly grown maturity seeping out, but Harrison agreed to go to bed with a substitute stuffed animal.  A puppy wearing a heart tag that read, "I Love You."  He asked me what those words were and when I told him, he smiled and said he was happy the puppy loved him.
Right then, all I could do was promise to bring Snowy up the moment I found him.  I couldn't express how proud I felt.  He was being so brave, so willing to solider on without Snowy, his prime source of comfort.  I was amazed he was so ready to sleep without his best friend for the first time ever, but I was worried he'd wake in the middle of the night seeking his security, his proof that he was safe and cozy, and not find it. 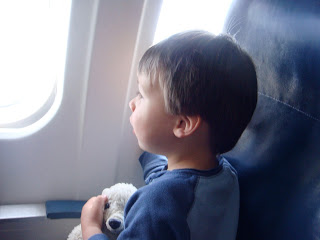 I didn't want him reaching in the darkness for Snowy only to find him gone and scared his world had suddenly changed.
Oh wait, that was me.
I knew that feeling, as does anyone diagnosed with cancer, of the dread in the middle of the night, your world tumbling over.  That feeling is hard enough to take at my age.  My little guy shouldn't have to know it.  Of course, I'm equating the power of cancer to the power of a stuffed bear, but to a four-year old, it's just the same and at that moment, it was just the same to me.  I couldn't right my own world, but I was determined to find Snowy...and I finally did, hiding amongst the shoes, buried under a raincoat on the mud porch, probably tossed aside early this morning.  He lay waiting for his boy to find him.
After switching out the stand-in puppy for the best friend, I felt a sense of satisfaction.  I had restored order to my son's world.  I wish it could be as simple for myself.  A furry friend to hold, a nose to rub and all is good again.  Cancer took away my sense of well-being, my belief in things I thought were true and treated it so badly, I don't know if it's possible to restore.  Maybe my destiny is finding that peace in something new, as Harrison tried to with the puppy he believed loved him.  Hopefully, I can.
Is there any one thing that makes you feel better?  Something that restores your spirit and sense of security when feeling lost? 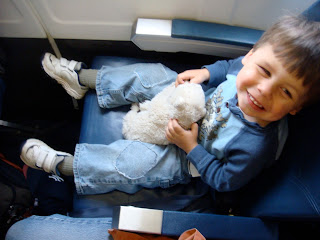