Are we brave?
I know many people think we are.  We're told often enough by people never having dealt with breast cancer, but are we truly brave?  Is it brave to face the fears in the room simply because you're left without a choice?
My computer's dictionary definition of brave as an adjective:
Ready to face and endure danger or pain; showing courage
In spite of the compliment, I never thought of myself as brave.  It seems to me "bravery" comes forward when you can choose to walk away from the challenge, from the scary, from the pain...but don't.  You choose to meet them head on.
Most breast cancer patients do not have the luxury of choosing.  Surgery and treatment is not the choice.  To live or die is the choice.  We're just doing what needs to be done.
Perhaps bravery comes later, after completion of surgeries and treatment. When months go by without a doctor's appointment, a blood test or a scan of some sort.  When new questions invade our brains brought on by too much time to think, too much time for cells to mutate and grow.  Again.
Next week I'll face my oncologist for the first time in four months.  It's been 9 months since he sent me for ct scans and ultrasounds of any kind.  That's a long time. Time enough for every ache, twinge and cough to convince me bad things are happening.
Where's the brave now?
With this heavy on my mind, we recently took our boys to a nearby ski area for group lessons, where I came face to face with two boys I'll call Brave and Fearless.
Meet Fearless:
"Ride in an open chair 30 feet up in the air?  Awesome!!'
"Ski black diamond with only having skied green twice?  No problem!"
"How high is that wall of snow?  I'm on it!" 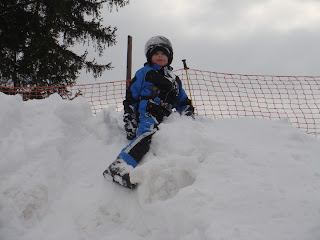 Meet Brave:
He's the one with feet firmly planted in the snow refusing to go with his instructor.  His little mittened hand reaching around to grab my leg, tears rolling down his cold cheeks.  His body stiff as a snowboard, while begging not to go.
He fought the idea of ski class for 30 minutes.  While trying encouraging words, promises of treats, and finally bribes, I kept questioning how I could have misjudged his readiness.  How could I have been so wrong about him?
Suddenly, as if resigned to his fate, he asked me to walk him to his group.  I told him I would, but then I'd have to leave.  He stood still as I wiped freezing tears off his face and promised to watch.  I didn't turn back as I walked away, afraid he'd run to me.   He didn't.  He stayed.  He had made his choice. 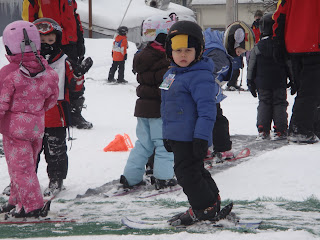 I watched him hover close to his instructor for a while, then watched him hang at the back of the line.  That's the thing about Brave, even when he ventures into the danger zone, he's always carrying some fear along.  He'll go eventually, but he can't enter freely to embrace the challenge.  He'll take it slow, come what may.
At some point, he started to enjoy himself.  He was no longer at the back of the line, but leading it down the "bigger" hill.  Brave had conquered fear. 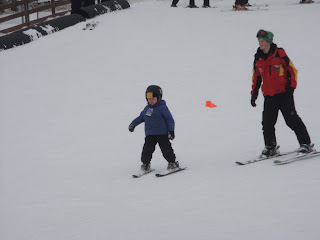 And the other one, Fearless?  Well, his name says it all.  It's easy for him.  He doesn't carry the panic, the trepidation, the worry.  He senses the adventure and doesn't just enter the zone, but barrels right on through expecting success. Good for him.
As for me, I'm not without fear, so I'm rooting for the brave one.  He stepped forward when every bone in his body told him not to.  When thoughts of the unknown terrified him, he went anyway and came out better for it.
Kind of like us when we choose to visit our doctors and follow through with tests despite the fear that travels along with us.  I'm just hoping to come out better for it.
Tweet
Posted by Stacey at 5:45 PM