One Moment in Time

I had been warned, told to take the Valium.  People would cringe and squeeze their hands as they spoke about it.  It would hurt, they said.  No way around it. Three needles, one at a time, directly in and around the nipple.  The injections of radioactive tracer used in the sentinel node biopsy the morning of the mastectomy.

Sentinel lymph node biopsy is getting a lot press lately as a better alternative to removing all lymph nodes to determine the extent of cancer's travels into the lymphatic system.  The radioactive dye traces the cells path when leaving the breast.  The sentinel node would be the first stop.  I didn't realize at the time, this wasn't standard practice.  I was lucky to have it.  The side effects of removing too many nodes are well documented and breast cancer patients have more than enough on their plate without adding unnecessary lymphedema.

Well worth the momentary pain I was being told about, but I didn't want to do it.  Who would? The description alone sounded horrendous.  I would do it, of course, but I really didn't want to undergo the procedure that made grown women teary just from talking about it.  I wondered how it could be worse than the core needle biopsy, but I was told from women in my surgeon's office it was.  They were trying to be helpful, to prepare me.

As I've gotten older, it's become increasingly clear we often have to do things we don't want to do and it seems there are varying degrees of enthusiasm, a sliding scale for unpleasant events.

I don't ever want to go to the dentist.  That's a little higher, maybe mid-scale.

Then there are a few things in life that have topped the scale.  Things that have literally stopped me cold, turned my feet to cement and made it nearly impossible to step forward.   Injections of radioactive tracer to the sentinel node is one of those things.  The best advice anyone could give me, was to take the Valium. 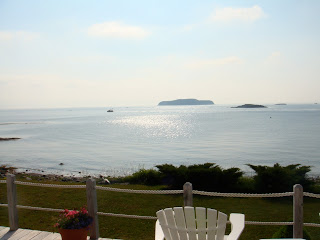 I carried with me the thought that life is made up of moments, for better or worse and though this was certainly "worse," it was still one moment, just the same.  A blink of an eye, a blip on the evolutionary scale. One, single solitary moment in the big scheme of things.  I could endure anything for a moment.  I took the Valium, tried not to focus on the procedure, squeezed the hand of the amazing nurse by my side and thought of the beach I'd rather be on with my husband, as a second nurse began with the needles.

One moment in time, then gone.  The nurses said I handled it well.  Right then I used a phrase I've heard often, but never used before or since.  I had gone to a happy place, one without breast cancer.

Hours later, I was in a hospital bed for the first time in my life wondering how the bilateral mastectomy I just had, would change me.  I was taped up pretty well, so I didn't feel that different.  The pain meds were doing their job and I knew the sentinel node and a couple of its buddies were clean.  I was thankful, but I knew this was not the end.  I hadn't reached the end of anything, but I couldn't contemplate that right then.

There was a clock with a calendar built in on the wall across from my bed and though the television was on below it, I only saw the clock.  I couldn't take my eyes off it.  I watched it click the minutes away until 11:59PM... That changed everything.

At 12:00AM, the date changed to June 23, 2009.  The sentinel node tracer injections and the bilateral mastectomy were yesterday.  Over...in the past. Those things that I had so dreaded, those moments...gone.  I was still here. On the other side of those moments.


What thoughts carry you through the tough moments?