I know some moments creep.  Usually the waiting moments.  Waiting for the phone to ring, waiting for test results, waiting for the doctor to open the door. All disturbingly slow, but in the big picture, life goes very fast.

I'm glad about that, for the most part.  That's the unwelcome gift left by cancer. I now want some things to come in a hurry, so I'll see them. Of course, no one is guaranteed a long lifetime, but cancer ensures I'll never forget that fact and so, I'm in quite a rush for my children to grow up.  As much as I want to hold onto them, to these young moments, I want to see them become young men, become self-sufficient, not need their mother so much, even more.

For that to happen time needs to march on.  But, I'm painfully aware someone here can't keep up.

It seems like yesterday that my husband (then boyfriend) and I brought home our giant dog from the local ASPCA.  To the best of anyone's knowledge, this beautiful German Shepherd was about 2 years old.  He had been abandoned. Left alone in an apartment for days after someone moved out leaving a bowl of water and a bag of dry dog food open on the floor.  His barking finally alerted neighbors who called the police. 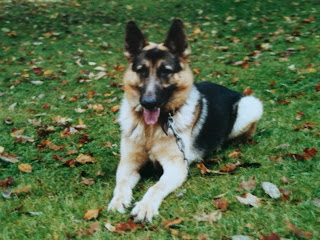 These cops undoubtedly pounded on the door before taking him because until recently, when his hearing started going, Goliath would go nuts if someone knocked on our door.

He would bark, growl and attack the door as if the sound triggered scary memories of being pulled from his home and caged in a shelter.  As if he were doing his damnedest to prevent it from happening again.

We were never the family whose dog let anybody enter with sloppy kisses.  He wouldn't let anyone enter.  Eventually we had to separate him from anyone he didn't know.  We couldn't walk down the street without him chasing after cars like a mad dog.  I longed to take my dog for walks, but his strength was overwhelming.  He was quite the challenge.

We tried training classes, but he didn't fit in with the happy-go-lucky, socialized dogs we met there.  Goliath had different needs.  Eventually we sent him away for six weeks to someone dealing exclusively with German Shepherds, training them for police work.  That helped.  We learned how to control him.  He understood he was no longer the boss and only then could I proudly walk him handsomely by my side without the risk of running into cars.

When he was 6 years old, life as he knew it screeched to a halt.  We brought home our baby, our oldest son.  You could almost see the resignation in Goliath's face.  He knew things had irrevocably changed.  Two years later, we brought home our youngest.  Goliath let out deep sighs as he curled up in a corner and watched.  The boys were too young to be any fun. 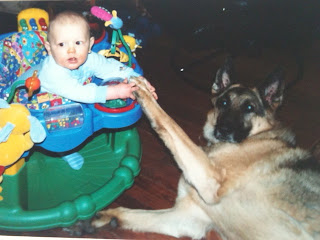 As the boys got older, so did Goliath and when they were ready to play with him, run with him, cuddle with him, he was no longer interested.  He was tired and his hips hurt.

It's a hard fact to face, but Goliath won't be the dog my boys remember from their childhood.  They love him, but he's not able to share much.  He won't go upstairs and has never been in their room, never slept in their beds.  They've never thrown a ball to him and seen him gracefully retrieve as he used to do in his youth. The boys never knew a young Goliath.  They just know how to be gentle with their old dog.

These days he spends his time sleeping in a sunny spot.  He no longer hears a knock or a doorbell.  A stranger could walk right in without him knowing.  And today, he fell twice in front of me as his back leg gave out, leaving me to wonder how much pain he's in, but a part of me doesn't want to know that answer.  Then I'd have to do something I'm not ready to do.  I can't say goodbye to him.

As I sit here with him at my feet, I see time as a double edged sword.  As much as I want life to hurry along, as much as I want my boys to grow, Goliath reminds me he's grown too fast.  If only I could freeze the earlier days, when he was young and cancer hadn't invaded our house.

But, it's not to be.  If the shelter was right, Goliath is 13 years old now, old for a big dog, but forever the heart of this family, our first boy and it's he that causes my inner conflict, this battle with time.  For him, I want to stop the clock.  I don't like where time is taking him.