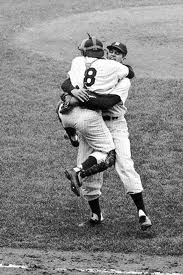 My mother was a huge Yankee fan.  She explained it simply by saying she was born and raised in the Bronx.  How could she not cheer for her hometown team?  Especially during the1940's and 50's when being a Yankee meant winning.  Everyone wanted to be a New York Yankee.

Even though we moved to a northern suburb when I was two, we never lost sight of our team.  My brothers lived and breathe Yankee baseball and I learned at a young age if I wanted to hang with them, I better like what they liked and they loved the Yankees.

By the time I was twelve I could spout fact after Yankee fact.  I inhaled every book I could find about the team's history.  I knew every year they won the World Series and who they beat to do it.  I could recite their managers in chronological order.  I remembered batting averages and earned run averages of all the players.  I poured over yearbooks, memorizing stats and interesting information about these guys.  I day dreamed of being the first ever bat girl.

We loved this team because they had pride in themselves and their history. Putting on pinstripes meant carrying on a tradition rich in glory, grace and perseverance.  Names like Lou Gehrig, Joe DiMaggio and my personal favorite, Mickey Mantle.  They did their job every day without bullshit and blame, despite injury.  They showed up and came to win.

What does this have to do with breast cancer?  Nothing really, except it has everything to do with my mother.  She loved watching games with us.  She knew all the players.  She got just as excited or annoyed at wins and losses as we did.

As a mother myself now, I wonder if she watched as a way of bonding with us. Sharing something familiar just to be closer to her children.  I think that sounds good in parenthood theory, but I don't buy it.  She was a fan, pure and simple. As her father was, and they passed their passion on to us.

Yankee baseball was universally loved in our house.  It carried across generational lines and through our relatives.  Our cousins were great fans and when we were all older, we'd sometimes meet at Yankee Stadium to catch up with each other while taking in a game.

In the days before texting and email, we'd actually call each other to see if we were all watching an important game, making sure no one would miss a memorable moment.  The big hit, the great catch, the very best win or sometimes, the heartbreaking loss.

Our inner circle changed over the decades.  Our grandfather died leaving his beloved Yankee jacket, dark blue with interlocking NY.  My brother wore it to the final opening day game ever played in Yankee Stadium before it was torn down to make room for a new stadium.  One, my grandfather, mother and aunt would never see.

Breast cancer intrudes taking our aunt and our mother.  We grow up, get married, have children.  Some of us even move across the country and watch the Dodgers!

But, I think we remember where it all came from.  Last Saturday, most of my family gathered to celebrate my uncle's 75th birthday.  My California cousins came east for this milestone, putting an end to the years we hadn't seen each other.

My father stood for a photo with his two brothers-in-law.  My mother's brother and the birthday boy, her sister's husband.  Three men brought together more than 50 years ago by two women no longer here, surrounded by a house full of their legacy. 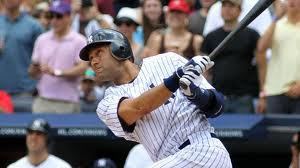 A few minutes later, all the cousins, including the new grandchildren watch the latest, greatest Yankee make history.  We erupt as Derek Jeter knocks out a home run to capture his 3000th hit.  A feat only 27 other players in the history of baseball have ever accomplished and the first Yankee to do so.  I picture my mother cheering right along with us, like she used to.  So happy this took place on the very day we could all be together.

How proud our mother and aunt would be, seeing how their six children became twenty and still growing.  How we still care about each other.  How we managed to forge ahead in spite of their conspicuous absence.

Perhaps it's due to the roots they tendered, setting us up for success.  Kind of like our Yankees.  We couldn't have this team, our family, without those that came before, cheering us on, teaching us how to hit it out of the park.