My dog, Goliath, my buddy, my first boy, nearly died last night.  He is a German Shepherd and he experienced Bloat.

Bloat is a serious condition that affects large breeds when too much air is taken into their bellies, usually by eating too fast or exercising before or after a meal.  The stomach expands and after a while, twists around, like a wet rag. There is a small window of time to relieve the pressure, otherwise, it is quickly fatal.

As I've written here before, I'm very aware of the passage of time with every glance at my old dog.  He's 13 now. As recently as March, he weighed his usual 100lbs, but on Monday, he was down to 76lbs.

He's shrinking right before my eyes.  My once, strong, handsome boy is old.  He struggles to stand.  He can barely walk up the driveway.  The dog who used to pull me down the road as if he were walking me, now lags behind, gingerly trying to keep up.

We question the dramatic weight loss.  Is pain from arthritis hampering his appetite or is there a bigger issue we're not seeing simply because we don't want to know.  Are we refusing to face the inevitable?  Afraid to prepare ourselves for the awfulness of saying goodbye.

I'm convinced whether or not we want answers, we need them, to do right by Goliath.  He deserves that.  I think of his quality of life and believe it's there. 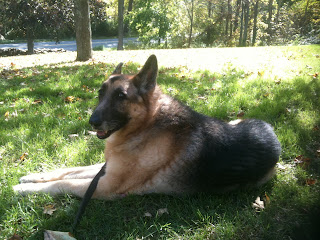 He loves being outside, laying in the grass snapping at flies or bees or whatever comes his way.  He still races by with a biscuit in his mouth, eager to devour his prize, for fear someone might get a piece of this deliciousness.  He inhales the affection shown through belly rubs and ear scratches and shows his appreciation by dropping his heavy paw in the lap of the lucky giver.

And if that's all he gets these days, then I need to believe it's enough. Quiet times leading to a peaceful, unavoidable end.

But not last night.  An hour after his dinner he started to writhe in agony, gasping for air and foaming at the mouth.  It was after hours and the nearest emergency animal hospital was 25 minutes away.  Leaving our boys with my mother-in-law, who was thankfully here, my husband and I took him.  Driving faster than speed limits allow.

I sat in the back with him, holding his head, listening for each raspy breath, while his skinny body trembled.  All I could think was, "Don't die, Goliath.  Not in the back of a car, in this horrible, torturous way."  After all our years together, this can't be how it ends, but any other conclusion seemed impossible.

My husband spoke of doing things differently when Goliath gets past this.  I don't know where he gets his faith or maybe it was denial.  A deep refusal to believe his beloved best friend was leaving us.  Maybe he was being naive. I was glad he wouldn't face the worst case scenario alone.  I was the one used to the sad ending, not him.  I would be there to hold his hand as he so often held mine.

The minutes and highway exits slowly passed and by some miracle, Goliath was still alive when we arrived.  The vet managed to relieve the air pressure before the stomach twisted completely.

I was in awe of my husband's composure.  He never believed life with our dog was over.  To him, it just wasn't an option.

I was proud of Goliath.  He summoned his strength when he needed it most.  Maybe he knew he was loved. Maybe, it just wasn't his time.  Maybe, things don't always need to be so tragic.

Amazingly, my dog is home now.  Laying calmly at my feet, as he should, with only a paw print bandage to show for the night's excitement. 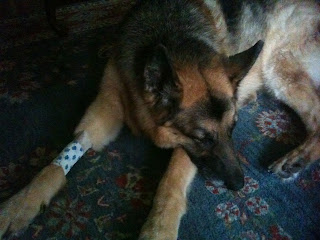