What's in the small tin box with flowers on it, a small boy might ask.

It can't possibly be all that remains of my gorgeous dog, would be my answer.

Such a small box can't contain the life force I still feel with every glimpse of his face in some innocent photograph. His spirit, too large to be harnessed in a confined space, too anxious to be free.

I see him eager, excited to play, content to lay in the sun or romp in deep snow.  I feel his big snout pushing its way under my hand, searching for pets.  And then I'm sad again, but it goes beyond missing my friend.  There's a sense of guilt that somehow I let him down.  Did we let him go too soon?  We had promised to take care of him.

I tell myself he had a good life.  When others would have given up on a strong-willed, nervous, fiercely protective German Shepherd, we dug in, found the right trainer and taught him who was boss.  He had to know we were in charge.  The responsibility was ours, to look after him, not the other way around.  He learned to trust in us, to follow our commands.  He learned to let his guard down and just be.  It took quite a while, but we got there.

After experiencing the hills and valleys of his lifetime together it makes sense to be heartbroken at its end.  To feel his presence when getting the mail or turning out the lights at night.  I still look for him, and try to stop myself from wallowing, because after all, I think, it's not cancer.  He was an old dog who lived a good life.

Like that doesn't make him worthy of the emotion, but of course, it does.  Cancer intrudes on everything.  Even my right to mourn my pet.

He was still my friend.  Ready with an open ear and a giving paw, never judging, never asking for anything more than a walk or a crunchy biscuit in return.  He was happy just sharing my space and all was right in my world when I came home to a wagging tail.

As thoughts of chasing tennis balls faded into long ago memory, and walking to the kitchen too much effort, when he no longer raised his head for ear scratches or treats or at the sound of his leash, when he was sick more than he wasn't and when he looked at us with questioning eyes, we knew, as promised.  We would take care of him.

Ours would be the last faces he'd see as he slowly, peacefully drifted off to sleep and hopefully felt some comfort. As ours were the faces he spied through a cage in a shelter more than eleven years ago.  Nose to nose, looking at each other, wondering would we be the ones to give him a home?

Maybe, as my husband stood away from the cage that day and said, "I like this one," the biggest dog in the shelter, thought the same about us.  Maybe, he thought it was his lucky day and I hope, as he closed his eyes that last time, he knew how much he was loved, how much joy and inspiration he brought to our lives and how very much he'll be missed.

As I look at my blog everyday, its photos and title and remember the reason for its name, I hope Goliath, somehow knows how very far his furry paw did reach.  Further than any of us could ever guess. 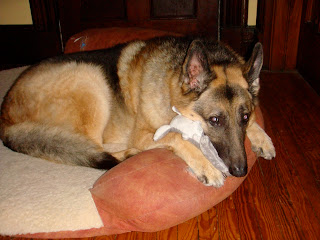