Thank you, Nancy Brinker.  For more than you know.

For providing the inspiration I needed to get blogging again when all I wanted to do was sit on the couch and mourn the loss of my beautiful dog.  When the thought of writing about breast cancer was beyond me.
For igniting a spark among my tired, depleted emotions.
For reminding me why my blog exists.  Why quiet bloggers everywhere with something to say -- matter.  We are not simply typing away in lonely, empty rooms for the sake of something to do.  Many of us were pushed into blogging by the sheer, ugly fact of having cancer or by the sad, frustration endured with the growing number of people we’ve lost to it.
In my case -- both.
So, Nancy Brinker, when people who are "scared to death" as your sister was, or like you, have lost someone or are dealing with their own breast cancer, women and men whose dream it is to realize the eradication of breast cancer, have their questions equated to words of “grumblers” and their concerns tossed aside as some lint plucked from a fancy pink jacket, you inspire us to write.  For that is all we can do.  We, the Grumblers.  We can ban together as one and as my friend, Jody, says, “Roar.” 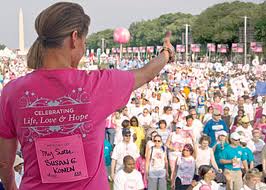 Because, here’s the thing.  No one is denying the good work Komen has done over the years.  Especially me.  I’ve personally seen the benefits of breast cancer awareness after my mother fought her disease in quiet secret and when I was diagnosed years later.  I could choose to keep my mouth closed and solider on, as she had or use my words to describe the reality of the disease; it’s various forms, it’s ability to return no matter one’s prognosis or treatment.  I was able to find empathetic support, because the disease was no longer in the shadows.
And that is a direct result of the pink movement bringing breast cancer education to the masses, making it acceptable to say it’s name, Breast Cancer, in most homes around the world, but not all, not yet.
So, I actually agree with you when you say “There won't be enough pink until the fight against this disease is won."  People are still dying.  Everyday.  Nearly 40,000 people in the United States alone will die this year, and it’s not because someone didn’t wear a pink tee shirt.  It’s not because someone didn’t purchase enough pink Tic Tacs or donate to yet another fundraiser.  It may not be because someone didn’t get a mammogram early enough.
Forty thousand people will die because we don’t know how to prevent metastatic breast cancer.
Because, in simple terms, we don’t know how to prevent normal cells from becoming malignant.

Maybe, if the bulk of donated dollars were given to research, we'd be more hopeful, but that is not the case.  Not when Komen for the Cure appropriates approximately 19% to research, along with a myriad of other organizations raising money "for the cure," but actually only raising enough to sell additional cute shirts and pink rubber bracelets adorned with catchy phrases.
What an opportunity you have, Nancy Brinker.  To stand up in front of the millions working so hard for the cause and announce Komen has fulfilled their goal of raising awareness, and while it won't be forgotten, fewer dollars will be allocated.  Stand up and declare it’s time for Komen to refocus their efforts where it's needed most -- research, because without that, breast cancer will never be cured.
Komen has the power to fund the most promising work, the opportunity to further incredible advancements.  Komen can be on the cutting edge of the breast cancer cure.
And isn’t that really what you promised your sister so long ago?  Back, when you yourself were grumbling about the way the disease was handled.  How can you fulfill your promise to end breast cancer without prioritizing research?
Please don’t disrespect us for questioning the status quo.  In the end, we all want the same thing.  A clear path to a future without breast cancer.  One where awareness campaigns are gone for good.